Arlo and the World’s Smallest Raingarden

Join 6-year-old Arlo on a quest to discover the power of natural stormwater filtration.

Southern Resident orcas are among the most endangered and polluted marine mammals in the world. In 2006, the Federal Government identified this ecologically unique population of orcas as one of the eight species most at risk of extinction. Unlike other orcas that live in the Salish Sea – which includes the waters of Puget Sound, the Strait of Juan de Fuca, and the Strait of Georgia – Southern Residents eat salmon, not seals or sea lions.

Salmon runs have plummeted across the Northwest due to a variety of factors, including toxic pollution. The largest source of toxic pollution to the Salish Sea is stormwater runoff. Polluted runoff not only degrades salmon habitat but can also contaminate and even directly kill salmon. As our Southern Resident orcas eat these contaminated salmon, they accumulate pollutants in their bodies that cause health problems, developmental deformities, suppressed reproduction rates, and infant mortality. Contaminated salmon impact our own health and communities as well, and therefore represent a key bridge between the health of Southern Resident orcas and Salish Sea residents. 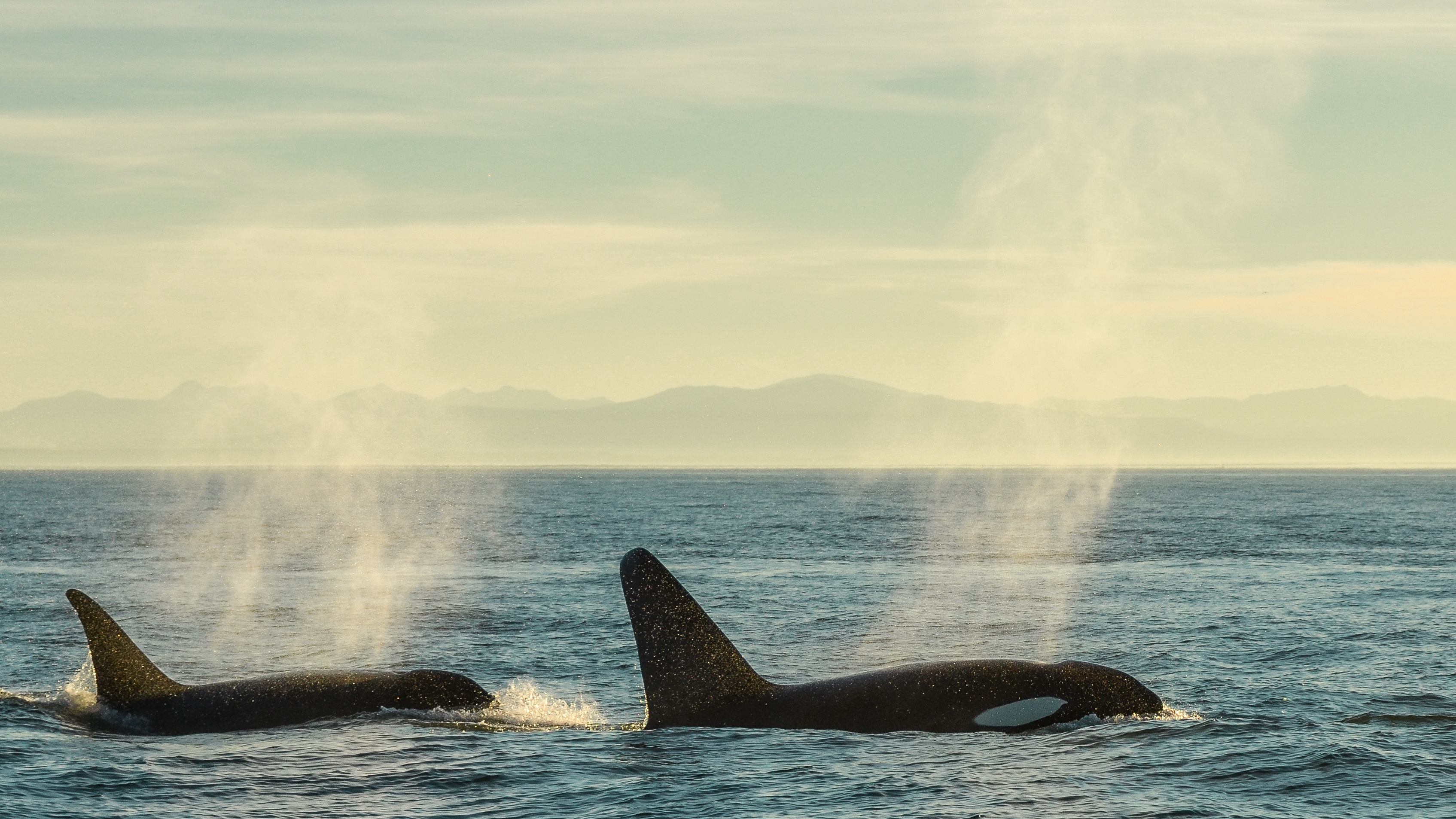 Tacoma can play an important role in Southern Resident orca recovery due to its location on the shore of Commencement Bay, which is at the mouth of the Puyallup River. The Puyallup and White River Chinook salmon runs are two of the largest remaining wild Chinook runs in Puget Sound. Polluted stormwater runoff has contributed to the degradation of salmon habitat and the contamination of Chinook throughout Commencement Bay and is therefore a significant threat to the Puyallup and White River Chinook populations. By capturing and treating stormwater before it reaches Commencement Bay, we will do our part to both increase the number of Chinook available for Southern Resident orcas and decrease toxic chemicals entering the orcas’ bodies.

Mitigating the impacts of polluted stormwater runoff is challenging. When rain falls on forests, grass, and mountains, the soil soaks it up. Plant roots hold the soil in place, and the rainwater filters slowly through it to enter streams, creeks, and rivers. But for over a century, we’ve developed land in a way that interrupts the natural water cycle. Paved surfaces and hard rooftops give rainwater nowhere to go. Instead of filtering slowly through dirt, stormwater runoff rushes downhill or pools in low-lying areas, carrying pollution it picks up along the way. The impacts include flooding, sewage overflows, and an expensive, growing network of pipes, pumps and other infrastructure designed to channel excess rainfall and send it directly into the nearest creek, river or lake, and often directly into the Salish Sea. If we are going to continue living alongside Southern Resident orcas, we need to reduce the amount of toxics reaching our waterways.

Green Infrastructure (GI) is a great way to keep pollution out of the Salish Sea. GI is a stormwater and land use management strategy that strives to mimic natural hydrologic processes of infiltration, filtration, storage, evaporation and transpiration by integrating natural drainage solutions into development designs, using strategies that collect and filter rainfall, and protect people from pollution and flooding. Forms of GI include raingardens, cisterns, and permeable pavement. One of the most common applications of GI is raingardens. Raingardens are bowl-shaped gardens that that collect and absorb stormwater, allowing the soil to naturally filter pollutants out of rainfall. Furthermore, raingardens play an important role in stormwater attenuation by pooling rain during times of heavy flow to reduce the volume of runoff reaching waterways. Stormwater attenuation can lessen local flooding issues as well as protect salmon habitat in creeks, rivers, and streams from erosion. By installing more raingardens and other forms of GI, we can clean stormwater and protect critical salmon habitat, thereby protecting our Southern Resident orcas. 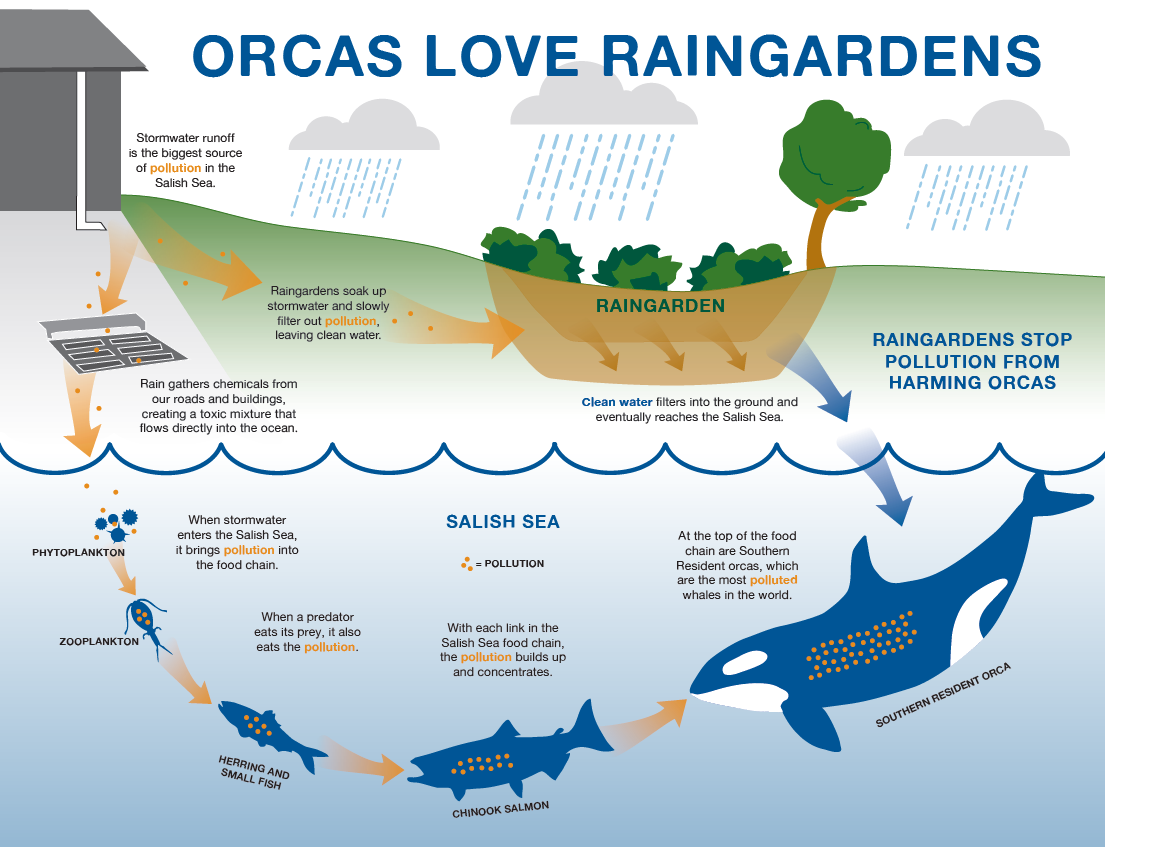 The science is clear, but the challenge remains: we must accelerate the rate of raingarden adoption on public and private lands. Raingardens installed in public spaces like schools and parks are excellent opportunities to educate students and the public about the benefits and resources of GI. School raingardens can play an especially important role in educating the next generation of decision-makers and community leaders about the importance of treating stormwater to coexisting with salmon and orcas. By installing and maintaining large, visible raingardens in public spaces, Orcas Love Raingardens (OLR) will connect communities and inspire students of all ages to contribute to orca recovery.