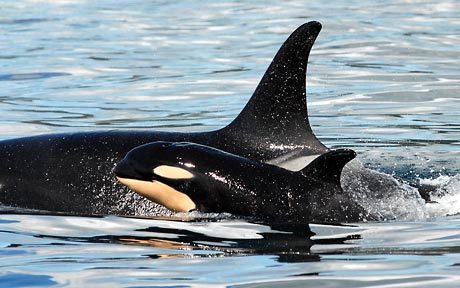 This year has been an especially difficult one for Southern Resident orcas. The world grieved with J35, also known as Tahlequah, who carried her dead, newborn calf over 1,000 miles for 17 days. Just a month later, J50, a 3-year-old female known as Scarlet, died despite aggressive efforts to feed her live salmon and medicine. Today, there are just 74 southern residents left, the lowest the population has been in over three decades. What’s even more concerning is that none of the calves born over the last three years have survived. Without big, bold actions, these orcas may be extinct within our lifetime.

People all around the world are extremely concerned about these whales, and we often get asked, “what can I do to help the orcas?” There are dozens of challenges that these whales face that require complicated solutions, but one problem that everyone can help fix is polluted stormwater runoff. This is the largest source of pollution in the Salish Sea, and it comes from everywhere.

Every time it rains, water collects all the pollution on our streets, lawns, and buildings, creating a toxic brew that kills salmon, destroys habitat, and causes a host of health problems for orcas. This pollution is especially problematic for orca calves. The milk new mothers make for their calves has dangerously high levels of toxic chemicals, including DDT and PCBs. This may be one of the reasons calves are struggling to survive. If we can filter and treat more polluted runoff before it enters the Salish Sea, we can provide more, and healthier, salmon for orcas.

That’s exactly why we launched Orcas Love Raingardens in Tacoma. This program aims to install and maintain large raingardens at schools and parks throughout the city. Not only do these raingardens capture and clean more stormwater runoff, they also serve as outdoor learning spaces. By helping plant raingardens, students get hands-on learning experiences that deepens their understanding of both the impact pollution has on orcas and how they can help solve this problem.

This fall, we partnered with three schools on raingarden planting projects. At each site, student volunteers helped to pull out weeds and invasive species while putting new plants into the ground – in the end we planted six raingardens! Big thanks to GardenSphere, which provided all of our plants for these projects at a discounted price.

Where’d We Work This Fall?

Norpoint Park: Norpoint Park, which is managed by Metro Parks Tacoma, has a raingarden that captures the stormwater from the local community center, but it needed some new plants after old ones died, and there were several invasive species that needed to be pulled out. Working with staff from the City of Tacoma, Metro Parks, and 50 student volunteers from nearby Meeker Middle School, all the new plants and get rid of most of the blackberries (a thorny and aggressive invasive species!). While we were working, one of the students yelled out, “I have so much respect for gardeners now” – we all got a laugh out of that!

Kandle Park: Another Metro Park property, Kandle Park has three raingardens around the playground and skate park. Just like Norpoint, though, these raingardens needed some new plants and were getting overrun with weeds. Maintaining these raingardens is hard work. Fortunately, we were joined by students from nearby Wilson High School’s environmental club. These students do a lot of hand-on projects to protect the environment, and they were a big help at restoring the raingardens at Kandle Park. We were also joined by Senator Patty Murray’s staff, who pitched in to help improve the local park and protect orcas. Senator Murray has been a long-time champion of protecting and restoring Puget Sound.

Baker Middle School: There were two raingardens at Baker Middle School that were not doing well. Plants were dying, and water wasn’t pooling in the gardens. These raingardens are important to reducing the school’s impact on Puget Sound – one collects stormwater from a parking lot and the other collects it from the roof. Staff from the Pierce Conservation District came out to investigate was happening with these raingardens, and we found out that the soil they had was too sandy and needed to be replaced.

Tacoma Public Schools’ maintenance team dug out the old soil and joined us along with several students to put in new soil and cover it with a thick layer of mulch. Many of the student volunteers who joined us this day also went on our field trip over the summer to Point Defiance.

On November 10th, we joined Conservation Districts around the region in Orca Recovery Day to plant new plants in both raingardens at Baker. While we were busy planting, people across Puget Sound were also working to restore salmon habitat and reduce stormwater runoff at other Orca Recovery Day events. The Pierce County Master Gardeners designed each new raingarden at Baker, and were on hand during our volunteer event to help show us how to properly pull weeds and plant the new plants. We were joined by almost 60 volunteers, including students and teachers – even the principal pitched in! Students from the local community college and other members of the community also joined in the fun.

The work that we accomplished this fall has been fantastic, but to fully address the threat of stormwater runoff we need a lot more projects like these. Fortunately, the Orcas Love Raingardens program already has several projects lined up for 2019. If you’re a teacher in the Tacoma Public School district, you can click here to get your school involved. Homeowners can also take advantage of several programs and incentives to help you install a raingarden at your home, allowing you to take a big step in reducing your impact on Puget Sound and the Southern Resident orcas.

If we want to live alongside Puget Sound, we have to do a better job at reducing our polluted stormwater runoff. The southern residents are our neighbors, and we shouldn’t be sending all of our pollution and waste into their home. We can all be better neighbors and already the community is stepping up to improve our collective habitat.